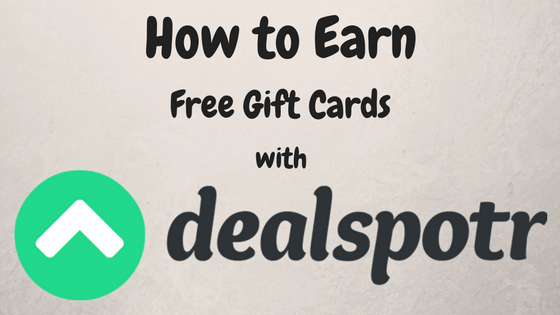 Hey there! On this edition of Profitable Platforms, I’ll be taking an in-depth look at a new rewards program that’s come to my attention. This program honestly exceeded all my expectations and I feel it deserves more recognition. Let’s get to it!

I’ll be straight with you: after trying out rewards programs like Swagbucks and InboxDollars, I was hesitant to give Dealspotr a fighting chance. Still, I had nothing to lose, so I signed up.

Boy, am I glad I decided to try it out.

Dealspotr is a place to find deals on basically everything: video games, appliances, furniture… the whole gamut. It describes itself as a ‘Wikipedia for deals’ and honestly, it’s hard to argue with that statement.

The Dealspotr users gather deals from all around the internet and post them in one place. It’s a nifty idea if you like to save (and who doesn’t, really?).

Now, Dealspotr is similar to Swagbucks in that you earn points for gift cards. But unlike SB, you don’t have to watch useless videos or fill out long surveys to earn points here.

To earn points with this program, you just look for deals around the web, and add them onto the site. That’s… pretty much it. You don;t even have to use them.

That’s how I earned $20 in my first week (it took me three months to earn that in SB).

But enough about that. Let’s see how it works, and how you can earn some gift cards today!

How Does Dealspotr Work, Bub?

Like other rewards programs, Dealspotr’s currency is points. When you get enough points, you can exchange ’em for gift cards.

Wait… didn’t I mention that in the intro?

…anyway, I’ll walk you through it here!

You’re gonna want to have an account, so you should sign up here. You’ll get 5,000 points right off the bat! That’s $5! With the withdrawal minimum being 10,000 points, you’re already halfway to your first gift card!

When you sign up, you’ll be asked to choose your interests. This is pretty crucial and a Dealspotr plus. Why see all deals if you don’t care about all of them? Just choose the ones you would use.

After that, it’s just a matter of posting a deal and getting points!

To add a deal, you have to find one around the web. This isn’t too hard. Amazon has hundreds of deals in every category. That’s a great place to look. Giants like Walmart or Target also deserve a mention. Depending on what you’re interested in, you can also go to more specialized stores, like Gamestop or Hallmark.

When you find one, take a picture so you can validate it, like so:

That’s $10 off for a digital version of The Last of Us Remastered (considered one of the greatest games ever made). I’d say that’s a pretty good deal, right?

Once you got your proof in hand , go over to “Post a Deal.” You can find that in the dropdown section of the toolbar. At least, I think it’s a toolbar…

Now, Dealspotr takes its deals very seriously, and wants complete information. So you’re gonna have to be specific. That means the store that’s offering the deal, the company that makes the product, a link to the deal, and a picture of the item.

You can also add more info for clarity, but it’s optional. Be careful though.

It’s important to pay attention to the expiry date of the deal. If there’s no deadline, just enter a 30-day one. Leaving a deal as “ongoing” basically means you’re saying it’s permanent.

And it’s best to acknowledge any special requirements like Amazon Prime. That could cost you. 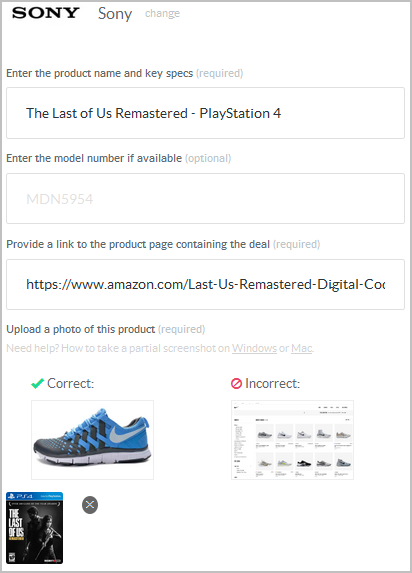 All this info really helps each deal look legit. Reliability is what makes the site different from so many other rewards programs. It’s always frustrating to be mislead by a wrong deal.

After filling in the specs, you need to validate the deal by showing proof. An example of this would be the picture I took a few paragraphs ago. It has to show the discount. This basically filters the lies from the real deals (pun!).

And that’s it! The deal is live!

Of course, there’s more to the site than posting the deals themselves. Dealspotr has many features under its belt that let you earn points and save money. Let’s check ’em out!

Disclaimer: I value a good subheading over relevance. I do not endorse taking names.

Dealspotr gives you points for doing many things. The most notable method is, of course, adding deals. But that’s just one way.

On the main page, you’ll see your personalized feed. If you use Facebook (and you most likely do), you’ll notice its similar to the news feed. This is a highlight of Dealspotr. It’s where you see new deals from categories you’re interested in. It also contains deals your followers are posting.

So… pretty much a news feed for deals.

The feed is extremely useful and gives the site a different flavor. A social flavor.

Deals can also be sorted by how “hot” or “on fire” they are. I’ll explain that later.

For now, let’s take a look at the Last of Us deal I just posted: 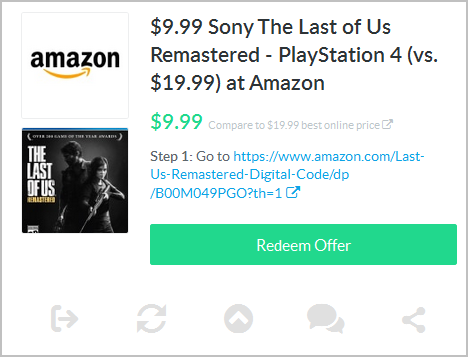 This is what’s shown when you click a deal.

The last button is simply a sharing option. You can share the deal on social media.

The first button lets you validate a deal. You basically test a deal and make sure it works or is still valid. If it turns out you spotted an error, you’ll get points.

There’s other ways a deal can be “validated.” I got a deal removed for bad spelling, but language and inappropriateness also count.

Mark my words, if you don’t enter a deal correctly, you will get invalidated.

And once you get invalidated a lot, your account will be unable to post deals. It’s strict, but it’s how Dealspotr’s accuracy is so high. They have a reputation.

In this way, you’re practically a mod. You keep the community clean of rotten deals. But you get points, so you’re a bounty hunter too. There’s a moral in that, one that unfortunately isn’t important enough to be given more than this one sentence.

The middle button (^) is a crucial one. It’s called “spot.” Spotting a deal is basically predicting that it’ll get “hot/on fire.” When many people spot a deal, it heats up.

You only get 5 spots a day at first. You have to use them wisely and spot deals you think will be big. The earlier you spot a deal, the more points you’ll earn if it get hot/on fire- 200 points is what you can expect.

As time passes, you’ll be allowed more spots in a day. Use them wisely!

The bubble…thing is the comment button. Yes, you can earn some points for commenting on a deal. But the comment has to be useful and relevant, not spam or idle talk.

Comments need to be detailed to earn points. Try to make them count, because bad comments will cost you points.

Dealspotr gives you a checklist of things to do every day- these are easy tasks like following more people or rating stores.

The checklist guarantees you 200 points a day- assuming you do nothing else each day, this means you get a $10 gift card every month or so!

You can earn more points by increasing your Rep, which starts at 0%. You can increase Rep by being active in the site. This means:

Rep is very hard to grow and maintain. You’re looking at several months of activity before getting to 100%.

There is another way, though…

When you successfully refer someone to Dealspotr, you earn 2000 points. The person you referred starts off with 5000 points, a major boost.

That’s not all. You also earn 20% of your referral’s points earned. Easy points right there!

You should keep in mind that this does not affect the referral. Their experience is the same as any other, only they start with 5000 points. It’s a win-win setup!

Is Dealspotr Worth It?

That’s a good question, and the answer really depends on what you expect out of it.

It’ll earn you way more rewards at a much faster pace than InboxDollars or Swagbucks (or ebates), but you can’t expect to make real money. Unfortunately, some people expect too much out of these programs.

You can’t make real money with a rewards program. That’s the truth. At best, you can score some cool prizes. Don’t expect to get rich from doing small tasks.

If you actually keep your expectations in check, you’ll find that Dealspotr is easily the best in its category. Why? Two reasons:

Adding a deal isn’t hard. Validating deals? Piece of cake. As I mentioned in the last section, you could be spending 5 minutes a day on the checklist and still get a $10 gift card in a month and a half without much effort.

If you can withstand the tedious surveys and mind-numbing games of InboxDollars, that same amount could take more than a few months (assuming you put in 5 minutes a day).

Plus, the withdrawal threshold is just $10, compared to $30(!) at InboxDollars.

If you look past the gift card aspect, Dealspotr is genuinely useful. I’m actually glad I signed up. I was never a huge deal hunter, but having so many savings in one place has definitely changed my view. It’s really addicting.

The personalization is fantastic. You can always find something you care about, and thanks to the commitment to accuracy, most deals actually work.

The Dealspotr customer service is very handy. They listened to what I had to say when I had many deals invalidated, even though I was being kind of a jerk.

Their response time is quick and they’re pretty accommodating.  No problems with this department.

So yeah, if you wanna use a rewards program, or just wanna save some money, Dealspotr is worth it.

The Bottom Line on Dealspotr

Throw a social network, a rewards program, and a deal curator into a blender, set it to “smoothie” and turn it on high. This is the recipe for Dealspotr.

This is by far the best way to earn free Amazon gift cards, and you can take that to the bank.

The point system is easy to understand, the deals will help you out, and it’s heavily personalized. Plus, points are easy to earn. Doing things like commenting and validating get you points. You don’t have to spend 20 minutes on a survey only to find out you don’t qualify.

If you have to use one rewards program, choose this one. You’ll get much faster results and have a lot more fun. The others are just too tedious for my liking.

But remember, this is not a way to earn a big pile of dough. If you actually want to make a living online, I’d advise to check out this program. It’s really the best place to do that.

What do you think about Dealspotr? Did you try it out? Got any questions? Leave a comment below!

Your desperado in deals,

32 thoughts on “What is Dealspotr? – How to Spot Deals and Earn Free Gift Cards”