Hey there readers! It’s time for another Makki’s Marketing review, this time on Work at Home Institute. Will it actually let you work at home? Let’s find out!

What is Work at Home Institute?

Imagine a scam a that’s just… there. A scam that’s spread across multiple domains, with no mention of who made it, except for a vague “Bobbie Robinson.”

I’m talking about the Work at Home Institute, or WAH. WAH is a work at home program that, you guessed it, is “guaranteed” to make you rich through affiliate marketing and link posting. How many times have we heard that one before?

I’ve never seen a program quite like WAH. I’m not talking about the training (which is subpar), but the way it presents itself, which is more than enough to dismantle any credit it has.

As you’ll find out, WAH is an incredibly deceptive and shady program, built on lies and false promises.

I’m starting with the website, or I should say websites, just because there’s so many lies on it. 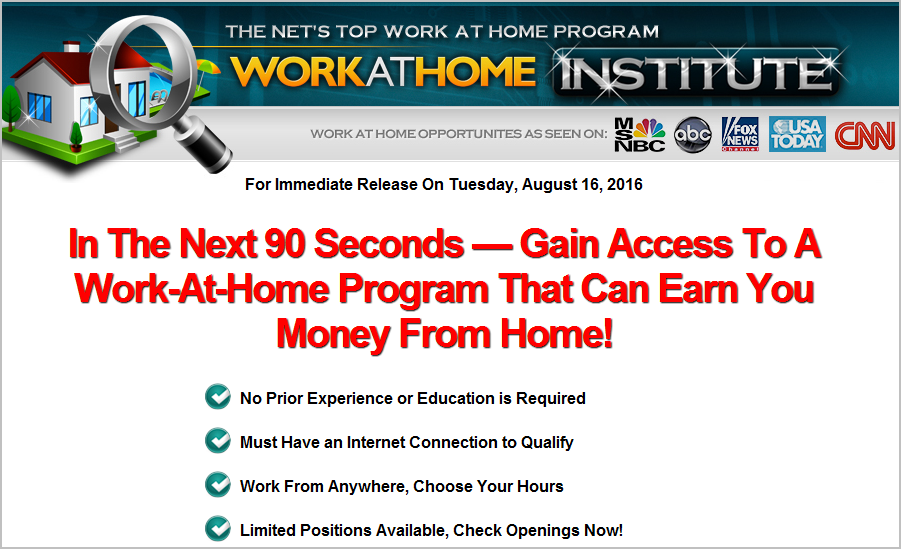 This seems to be the main one, wahinstitute.net. The others look just like it, except for the tagline at the top. It’s probably just in case a site gets taken down.

Anyway, there are many things wrong with this setup. First let’s take a look at the top. You’ll see that apparently WAH has been seen on various mainstream news networks:

Hmm… that’s quite the portfolio. You’d expect WAH to be a household name with that coverage. Too bad it’s a total lie.

Look closely and you’ll see that it says “work at home opportunities as seen on TV,” not WAH Institute. This is just saying that these networks have covered work at home jobs before! Which is surely true. But not about WAH!

You won’t find any record of ABC doing a report on WAH, that’s for sure.

Now, if you look under the logos, you’ll see that apparently, WAH was released today (August 16, date of writing this). I just…why would…huh? I have no words. Classic scam behavior.

Scroll down the page and you’ll see this gem, where you’ll need to divulge your zip code and email:

Yep, it looks like there’s a limited number of spots available! See how in-demand WAH is? It’s very exclusive. I’ll check my availability and see if I’m “lucky” enough to have a free spot:

Wow! I have a spot available! And I “unlocked” an extensive sales page!

If you couldn’t tell, the form was just there to collect your email address and give off a sense of exclusiveness. A list is extremely important, after all. But as you can see, it will accept anything.

After you enter your information (or anything) you’ll get to watch a video about WAH’s supposed greatness.

Watch the minute-long video and you’ll see that it has nothing to do with WAH Institute, but rather with a mom working at home.

Also, although it looks like a “news report,” it’s a total fake. This is a cross between a news report and an advertisement. A quick search tells me they’re called advertorials. Yes, this thing was done with actors, which aren’t so hard to find. I’m pretty sure this is violating some law.

As you read the page, you’ll see the generic hype that “get rich quick” schemes love so much. You know, the personal sob story, the sudden success of the creator, the outrageous earnings… even the totally fake testimonials.

Luckily for WAH, many people don’t know these traits, and this is how the system can stay afloat.

So what’s actually in the training that will change your life?

WAH’s training covers a variety of topics, all based around internet marketing.

Now, despite the lies and deception, WAH’s training is not horrible. You could definitely learn a thing or two from the 100 HD videos provided.

In the excerpt above, you can see that there are many aspects covered. But the problem is, there are only 100 or so videos. How are you supposed to fit all that in that many?

These are more of the topics that these 100 HD videos are supposed to cover. Now, an experienced marketer will know that each of these topics are too much for 100 videos. At Wealthy Affiliate, there are hundreds of videos dedicated to SEO alone, among others.

Heck, around the internet there are thousands of articles, videos, podcasts and other media that explain social media and article marketing. It takes a very long time to know what you’re doing. There’s no way WAH can cover all that in 100 videos.

Even if it did (lol, try to imagine), there’s still the fact that paying $97 will only give you access to the training for 6 months. I’m not kidding.

The Obsession with Links

You wouldn’t have known what WAH does if you read the training page. All it does it tell you about how you can get rich posting links.

Considering that link-posting has nothing to do with internet marketing, it’s strange to have it in the program. Of course, it’s most probably a way to convince buyers of the money they’ll be getting.

I’m not gonna lie, posting links is a way to earn money online…but it is way less profitable than WAH makes it out to be.

Apparently simply posting links will make you a millionaire in no time flat. This exaggeration is done to lull you into a false sense of assurance that you’re gonna make some dough no matter what.

You know those annoying “movie link” guys on Facebook? The ones that say you can watch new movies for free? Or how about the guys who pop in and say they’re earning $1000/week on random articles? Everyone hates them. Well guess what, those guys are link posters.

So you’re basically gonna be spamming social media, forums, and blogs getting people to click your link, all the while being moderated and banned.

One more thing, although WAH says the minimum your link can earn is $10 per link posted, the truth is those “link guys” are often foreigners working for a very low wage. There’s no way you’ll be paid more than them, especially for a job as simple as posting links.

The Price(s) of WAH

One thing’s for sure: WAH costs $97. That’s all the sales page can talk about.

So apparently you could be on the way to riches in 5 minutes just for $97. But what if you don’t want to spend that much? Well, you could leave by pressing “back” or closing the tab. But then a popup comes up, telling you to say on the page.

If you stay on the page, guess what happens? 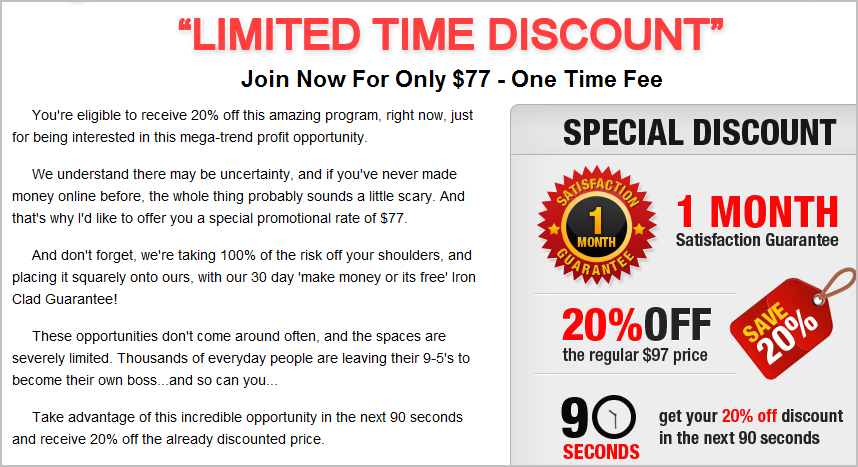 That’s right, you just made the price $77! Just for being “interested” in the product! A whole 20% off just for trying NOT to buy something!

Whoops, I better go buy it before my 90 seconds ends. Oh wait, that won’t happen. I could stay on that page for a year and it wouldn’t expire.

With that in mind, I’ll just close the tab and…wait, another popup! Let’s stay on the page one more time. 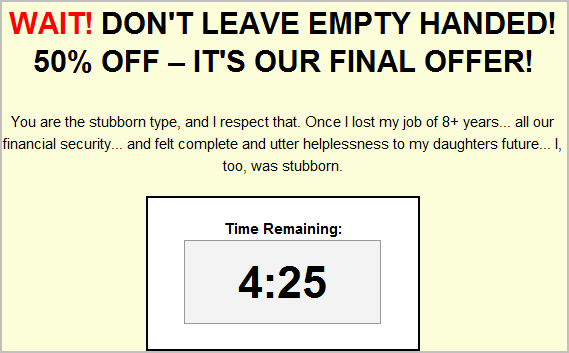 Surprise, surprise, another discount, just for being so lovingly “stubborn.” This time you’re given a 5 minute time limit to accept the offer. No points for guessing what happens at the end.

All right, I have to say it. Nothing happens. It gets to 0 and nothing changes. Just another marketing tactic. See the language they use? They’re almost pleading with you to buy the program.

If you wanted to buy a $60 video game, and you backed down at the checkout, what would you do if the cashier cut the price to $50 on the spot? Then again to $35 after you insist on not buying it? You’d suspect there’s something wrong with the game.

I should also mention that according to the terms and conditions, no matter what price you pay, you’ll only be able to access the product for six months. That should seal the deal… NOT!

Work at Home feels like every scam stereotype rolled into one: misleading marketing, changing promises, multiple domains, outlandish promises, and of course, ‘get rich quick.’

While I concede WAH’s training offers, well, something, it’s not very useful to other paid programs, or even free ones.

But WAH doesn’t believe in its training anyway. It sells itself on link posting, which isn’t a very good online business.

So would I call it a scam? Eh, not quite. It does give you training, although it’s outdated, and it does actually give you links to post, even if you’re paid in peanuts. And it does last a full six months…

Lol, what am I saying? Of course it’s a scam! You’d have to be crazy to buy Work at Home Institute after seeing how deceptive and unethical it is. These guys are so desperate they give you half off when you refuse to buy their product!

Don’t waste your money with WAH. You can’t just start a business. You need a website, and hosting, and SEO and all that. There are better ways to start an online business, you know.

And if you ask me, the best of these ways is no doubt my #1 Super Program, Wealthy Affiliate.

See, I used to chase marketing scams like WAH because the promise of quick riches was too good. I spent a lot of money trying to find the magic bullet, the secret sauce, the silk road… you get the point.

But then I found WA, which told me straight up that I wasn’t gonna get rich easy. Couple that with the free membership and the 2 free websites you get, and I joined immediately.

The best part is, you can try it out for free, with no credit card needed. In fact, if you, for some reason, refuse to upgrade to the paid membership, you can stay free as long as you want.

What do you think about Work at Home Institute? Do you agree with my assessment? Have any questions or concerns? Leave an answer in the comment section below!

Your director in downsells,

20 thoughts on “Desperate Downsells – What is Work at Home Institute?”