Anyone looking to make money online nowadays knows that a website is needed. It’s a place where an entrepreneur can do pretty much anything, from blogging to eCommerce. While, social media may play an important role, a personal site is fully under the control of the owner. It also gives off a sense of seriousness. No matter which way you slice it, you can’t be official without a website of your own.

That said, not everyone wants to pay for their sites. Maybe they don’t have a budget, or they just aren’t serious enough. In those cases, there are plenty of options to take, depending on what you want.

WordPress.com (not to be confused with WordPress.org) is a platform where you can create free WordPress websites. The interface is similar to a regular self-hosted WordPress site, with lots of fat taken out. Actually, with all the fat taken out, along with some non-essential organs:

It also has a limited selection of themes (a few hundred) which doesn’t allow for much choice. Customization is also pretty limited. There are also WP.com ads across the site.

Despite all this, it works as a blog. There’s email support and the slick WP editor. Just don’t expect much in the way of uniqueness.

And of course, your site will be a subdomain of wordpress.com.

Should you want to upgrade, though, here are the plans:

If you ask me, those prices are ridiculous for the features offered. Plugins, for example, are only available as part of the Business plan, which costs $32/month. There are countless better places to get a WordPress site up and running for much cheaper.

Owned by Google, Blogger.com lets you create a free website, but it’s pretty much just a blog. There’s aren’t much bells and whistles.

Blogger used to be huge in the mid-2000s, but platforms like Medium and Tumblr have taken some of its marketshare. Nevertheless, it’s still a decent choice if you want a free website. 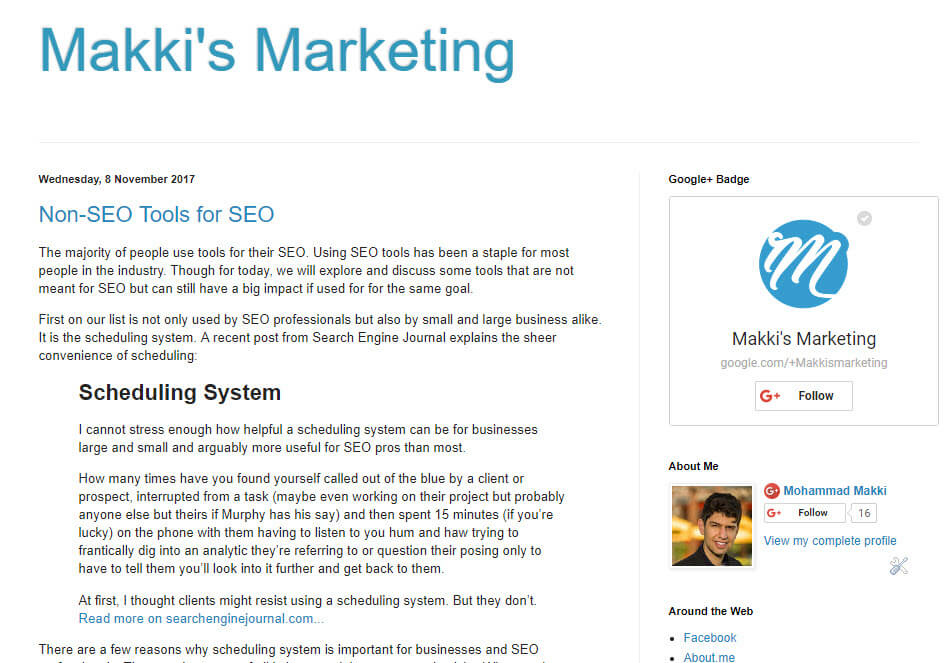 As you can see, it’s pretty clean and gives you a sidebar to customize. It also integrates with Google Plus. I know that’s not where the action is nowadays (was it ever?), but G+ is still a ranking factor on the Google search engine, so there is some benefit.

Blogger gives you a decent choice of themes. Not a lot, but to be honest you don’t need that much. The blog is the centerpiece.

One thing I love about Blogger is that it lets you run Adsense ads, and keep the money it generates. That’s a much better deal than WordPress.com, though Adsense doesn’t really generate that much money.

As for editing, it’s pretty simple to do here. 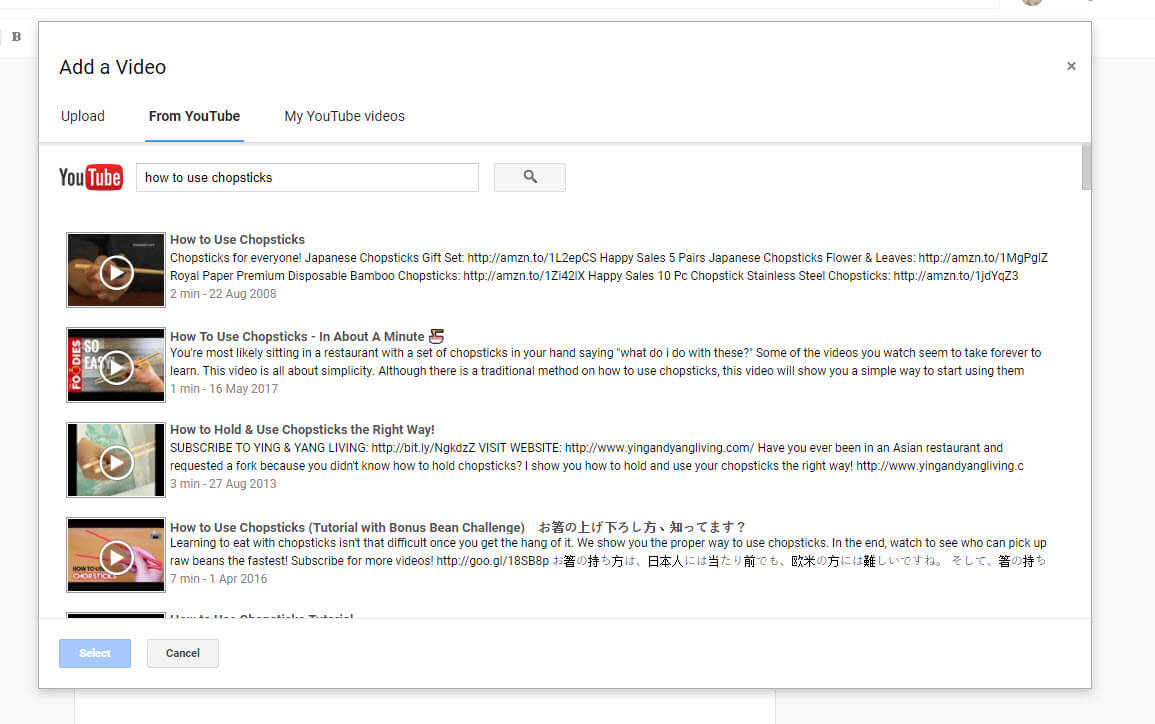 All in all, I’d say Blogger is a great alternative to WordPress.com. It just works. Again, your domain will be yourdomain.blogspot.com, but unlike WordPress.com, you’re allowed to use a domain you own for free.

Tumblr is both a social media platform and a blogging one. You have a blog, but you can also follow other people’s blogs. Their posts will show up on your dashboard, like Facebook’s News Feed. It’s very easy to quickly fill your dashboard, as Tumblr has just about everything.

Now, Tumblr is a lot easier to use than the other two. This is mostly because it’s aimed at a different audience, one that really just wants to blog. Here’s the interface:

It’s as simple as that.

Tumblr offers a lot of blog themes are free, but the best ones are paid. Themes can also be custom made for free if a user knows HTML.

All Tumblr blogs follow the free site routine: domain.tumblr.com. I don’t really think that’s a problem for most users, however. They’re the kind that like to share art and all that jazz. The site gives you the option to buy a domain name, but that’s not free.

The downside of Tumblr is that there’s not much monetization opportunities. You’re in it for fun.

If I had to stick with a permanent free site, it would probably be on Tumblr. It’s simple, and loaded with features, but most importantly it’s pretty social. It’s not somewhere I’d go to make money, however.

Siterubix is the free website builder used on my preferred host, Wealthy Affiliate. If you’re not familiar with Wealthy Affilaite, you check out my review of the training course here. The platform uses WordPress, and hence comes with a lot of the restrictions WordPress.com uses- like a limited selection of themes and plugins. However, the free site does come with some extra features that WordPress.com doesn’t offer, making it a better choice in my opinion.

First, there’s SiteContent, a writing platform that makes articles a snap. It checks your grammar, sets goals, and offers article templates to improve the look of the blog. For beginners it’s pretty useful: 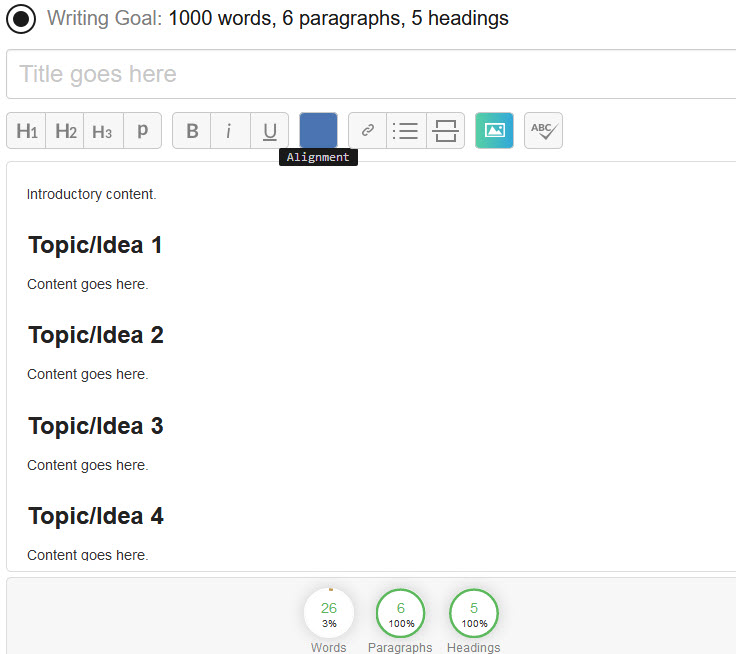 The website builder is also incredibly simple. WordPress.com is too, but this one is a lot more streamlined. 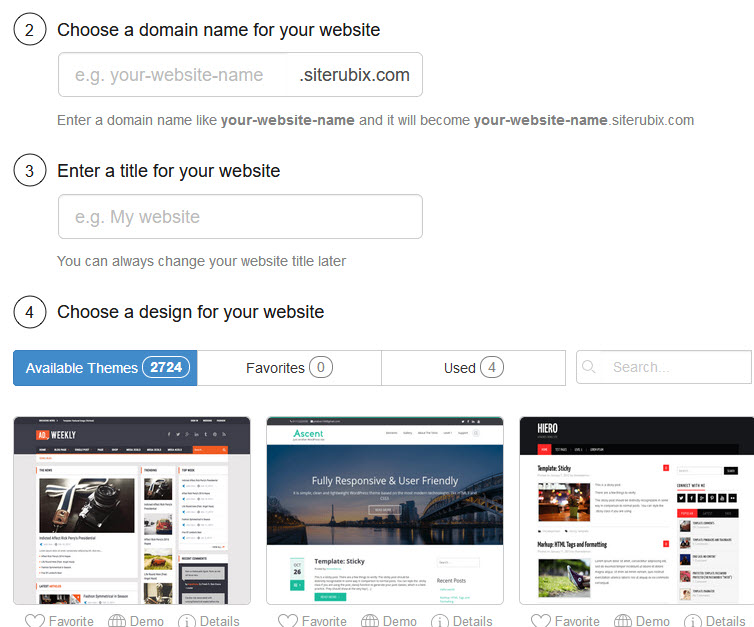 If you have a free Sitrubix site, you also get access to some of Wealthy Affiliate’s amenities, like affiliate marketing training. To be honest though, most of the coolest features are for paying members.

As a whole, Siterubix is almost like WordPress, but it’s connection to WA makes it more attractive, especially to website newbies. Its training is immensely useful.

Which is the Best?

These platforms are the four I use the most, but it’s hard to choose one as the best. It depends on what you’re planning to use your free website for.

If you want to be creative and interact with other people, Tumblr is a good start.

If you want a straightforward blog, Blogger is the way to go.

If you want a more customizable site that can do more than just blog, WordPress or Siterubix is the answer. In other words, these can give you the start to an online business.

You really should be using WordPress anyway. Siterubix is my preferred WordPress platform. WordPress.com is too expensive, and Siterubix comes with all the features WA has.

Consider Paying for a Site

These are all decent free solutions, but anyone serious about making money online should really consider paying for a domain name and hosting. It’s not gonna break the bank, and a custom domain name shows that you’re serious about what you do.

If you’re not sure about the potential of an online business, I would advise trying out WA’s free trial. That’ll get you up to speed on what to expect.

WA’s hosting is awesome, but one other host I recommend is Siteground. They can get you up and running for just $4 a month. That’s extremely reasonable. They also have live chat to guide you through the process.

No matter where you go to host, though, you’ll always have to pay for a domain name first. The price is usually $15 a year, and if you can’t justify that, then this isn’t the right market for you.