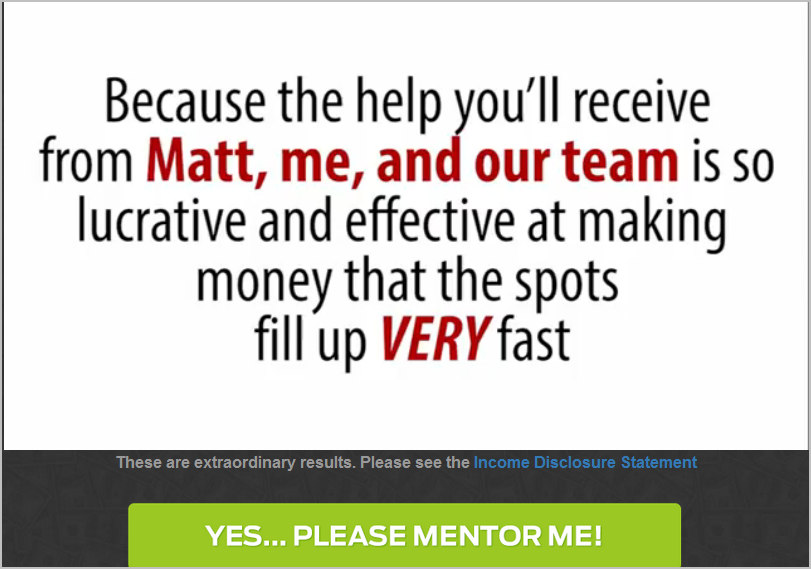 What is My Millionaire Mentor?

The world of internet marketing is filled with “done for you” and “autopilot” money making schemes. I’ve reviewed a ton myself. Most of them are useless wastes of money, and after looking into My Millionaire Mentor (or MMM), I can say it is no different.

Like its competitors, MMM promises vast amounts of money. The promo video even mentions you can $300,000!

MMM is supposed to teach you a simple 21-step program that will change your life through internet marketing. It was created by a guy named Ryan Mathews.

The truth is, MMM is too good to be true. The video says you’re almost guaranteed to make thousands of dollars with no experience! It looks like a scam, and I’ll show you why.

How Does My Millionaire Mentor Work?

I sure would like to know! The sales page has next to no information. As a matter of fact, the sales page is just the promo video with an order button.

There ain’t even a logo here, folks!

Throughout the whole thing, the voice of Ryan Mathews simply gushes about how this system that his friend Matt created turned his life around. Apparently Ryan went from poverty to an island in the South Pacific. I personally dream of the Swiss Alps, but that’s just me.

He shows us some testimonials, of course, but it’d be foolish to believe them. Fiverr is full of testimonial actors, who will literally film a whole video for $5. I’d bet my bottom dollar that Ryan Mathews himself is an actor.

Anyway, despite there being no hint at all about what MMM even does, I eventually figured it out at the checkout area:

Yep, MMM is actually a front for another program: My Online Business Empire. Ryan’s friend “Matt” is actually Matt Lloyd, the owner of MOBE. MMM is just a landing page set up to earn some commissions.

MOBE is actually a pretty well known marketing program. It launched a while ago in 2014, and over the years it’s garnered an infamous reputation.

I wrote a a pretty detailed review of MOBE not too long ago, and I can tell you it deserves any bad publicity it gets.

MMM tries to sell MOBE as being a one-time, $49 investment. This is laughable and a huge lie.

Now, MOBE is comprised of 21-steps, but paying $49 will only get you up to step 7. The rest of the course will cost you around $2500, and that’s the first of many upsells.

When you buy MMM- oops, I mean MOBE- you will get a personal trainer, or mentor. This may seem like a good thing, but in reality the mentor is there only to make sure you spend more and more.

Is MOBE a Scam?

As I mentioned in the last section, I already reviewed MOBE, so I won’t go too much into detail here.

Anyway, MOBE is based around promoting itself- that is, all the training teaches you how to get other people to sign up with MOBE so you can earn commissions.

But the chance of you ever making that kind of money is nil. Zilch. And a third synonym for “zero,” whatever it is.

Now, the company claims that it closes the sales for leads you generate. but they never specify how that works. Is your commission reduced? How do you know if you made a sale if they handle it in the first place?

Here are three reasons why I know so:

1. The Price of the Products is Extremely High

Many get-rich-quick schemes use upsells, and MMM/MOBE is no different.

But they’re all disgustingly expensive. There are around $70,000(!) of upsells in MOBE, and each is practically useless.

The $30,000 Diamond Mastermind membership is just a glorified retreat to some vacation spot.

And just to be mean, you have to pay $20 a month to be an affiliate too.

2. You Have to Purchase Products to Promote Them

If you want to earn a $10,000 commission on a sale, you have to actually buy the item first.

That’s right. Unlike regular affiliate marketing, you have to own what you’re promoting. This is just a really unfair condition that makes it so that all users pay up, with or without sales.

The products themselves aren’t very useful. Like most MLMs, they exist only so that MOBE isn’t a blatant pyramid scheme.

Given that the prices are so high, MOBE is guaranteed to make good money off a customer, if said customer wants to make big commissions.

3. Your Earnings Are Dependent on Recruitment

This is the biggest sign of a pyramid scheme. The only way to make money with MOBE is to get other people to sign up for the program.

It’s not like the program makes much of an effort to hide this. The MMM sales video even brags that there’s an “endless” pool of people to recruit in the world.

Pyramid schemes eventually die. They’re inherently unstable. An inexperienced marketer, after spending big bucks on the upsells, will be forced to sell to friends and family if they want to make at least some money.

You Won’t Earn Much Money With MMM/MOBE

According to MMM’s earnings disclaimer, there’s no guarantee of the success presented in the video. They even outright tell you that actors are used. Can you get any more blatant?

Underneath the promo video is a link to MOBE’s earnings disclaimer, which shows just how many people actually make a living with it: 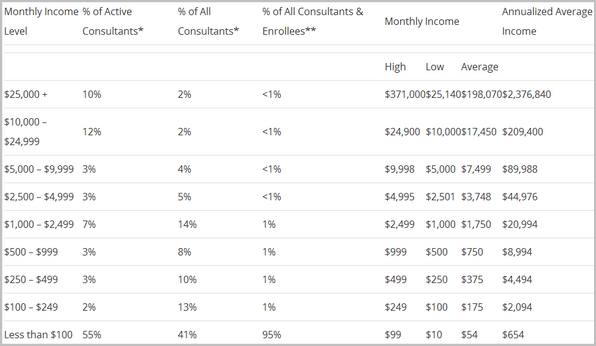 To be clear, this means that less than 5% of users actually make anything close to a living with MOBE. Considering how much you need to invest in the first place, this doesn’t really bode well.

Come to think of it, this is another sign of a pyramid scheme: high chance of losing money.

Is MMM/MOBE a Scam? The Verdict!

With regards to MMM, it’s simply a thinly-veiled disguise for MOBE. Ryan Mathews, if he’s even a real person, made it so he could promote MOBE. I mean, the affiliate link is right there.

As for MOBE… it’s a joke. It’s a pyramid scheme dressed up as an MLM, and I just can’t see how it could benefit a new user.

A program like MOBE charges you to promote their products. Why would you spend thousands of dollars simply for the right to make a commission off a product?

And even after spending those thousands, you still aren’t any closer to making money. If you truly have no experience in internet marketing, you’re basically a sitting duck.

This isn’t to say MOBE doesn’t make people money. As the disclaimer shows, it does. But those very very few are veteran marketers who use schemes like MMM to make many sales.

Finally, the fact that they close sales for you lends itself to certain abuses. They could literally convert dozens of leads behind your back, and you wouldn’t know.

…This is assuming you even make leads, which you probably won’t.

My advice? Skip MMM and MOBE. They’re not worth your time.

What is worth your time is trying out a program that actually works. Actually, just trying a program out in the first place is enough.

When I started out trying to make money online, I fell for programs like MMM and MOBE for quite a while. Every one of these products always promised a huge paycheck for almost no work. And every one of them failed, like MMM will.

My luck changed when I found a program that actually didn’t promise fast money. This #1 Super Program was the first one that actually let me try for free, and gave me two free websites to boot. And it actually taught me affiliate marketing the way it really is.

Add in the 24/7 support and private coaching, and it’s my favorite place to learn online business.

Check Out My #1 Super Program!

Don’t take my word for it though. Try it out!

What do you think of My Millionaire Mentor? Or should I say, MOBE? Do you agree with my conclusion? Leave your thoughts in the comments section below!

Your mentor in marketing,

12 thoughts on “Is My Millionaire Mentor a Scam? – It’s Not Even a Real Program!”