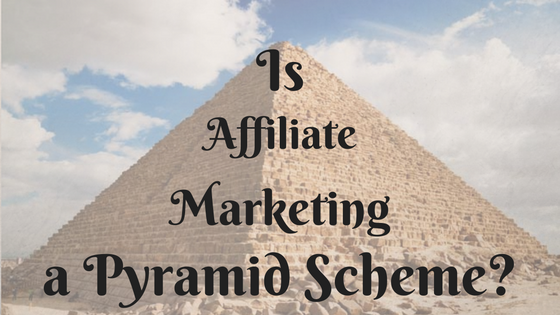 In recent years, working from home has become a lot more popular. More and more people are ditching their 9-5 grinds for a taste of online business.

And when I say online business, I mean eCommerce. I mean freelancing. Most of all, I mean affiliate marketing.

Affiliate marketing is my preferred method of earning money online. It’s simple and fun. Unfortunately, it has a reputation of being “scammy,” “unprofitable,” and it’s even been called a “pyramid scheme.”

Is affiliate marketing a pyramid scheme? Is it any of those things?

The answer, dear reader, is simple: no, it’s not. Not even close, despite what the bitter former marketers may say.

What is Affiliate Marketing?

Now, I have a detailed post on this question, but I’ll give you a quick answer here.

Affiliate marketing is when you promote a product in exchange for sharing the revenue of its sale with the product owner. When you join an affiliate program, the company gives you a link that it uses to see how many people you refer.

As a marketer, you can promote nearly anything. Computers, vacation packages, toys, monkey wrenches…monkeys. The list goes on!

Affiliate programs are always free to join, so there’s little risk on the promoter and on the company itself.

What Are Pyramid Schemes?

According to Wikipedia, a pyramid scheme is,

a business model that recruits members via a promise of payments or services for enrolling others into the scheme, rather than supplying investments or sale of products or services.

Basically, instead of actually promoting (or even selling) a product, you try to get other people to join the program. Well, sometimes there is a product, but it exists to make the scheme less obvious. Every time you recruit someone, you get paid a commission. So if you recruit lots of people, you can expect big bucks.

This short video does a good of explaining it!

At first, there doesn’t seem to be much wrong with this. Trust me, there is.

In a pyramid scheme, the only way to profit is to recruit other people. You’re not selling them a product, you’re promising them money if they can do what you’re doing to them: recruiting.

Pyramid schemes involve a lot of money, so joining is very expensive. Spending thousands (or tens of thousands) of dollars on one is not unheard of.

After you spend all that money, you obviously want to get it back. So you’re forced to make sales. Most victims of pyramid schemes aren’t actually salesmen (or even marketers). They won’t even have a website.

Ever had an old friend suddenly get in touch with you again, only to try and get you to join some expensive “opportunity?” It’s almost a stereotype that most people who get in pyramid schemes have to sell to friends and family. They’re that desperate.

At the end of the day, they have to accept their losses. Pyramids are only kind to the people at the top.

Both affiliate marketing and pyramid schemes involve getting people to sign up to or buy something.

…That’s pretty much where the similarities end.

On the other hand, there are multiple differences between the two, which I think make it clear that they’re completely different things.

As I mentioned before, almost all affiliate programs are free to join. The ones that aren’t, are a good sign of a scam.

There’s not much financial risk to being an affiliate. Most costs come from starting and running a website, not the actual marketing. You could go months without a sale and not feel the effects.

On the other hand, to even have the right to promote a pyramid scheme, you have to spend huge amounts of money. Sometimes it’s hundreds, most of the time it’s thousands. No matter what, you’re likely to lose most of that.

Even if you somehow get some poor sap to join, you have to get a lot more to break even.

As you know by now, you promote anything as an affiliate marketer. If you join just one program, Amazon, you have access to pretty much every kind of product.

Since people are always buying things, there’s always gonna be a market. In fact, more and more people are using the opinions and reviews of online influencers to decide what to buy. Most of the work is done for you, if you look at it that way!

Pyramids, though, are way more limited. Think about it. It can only grow by adding more people. Simple math tells you that it’s a matter of time before it stops growing and collapses. The diagram explains it well.

This is the reason all pyramids eventually fail, no matter what. It’s just not sustainable.

Plus, even when actual products are involved, you’ll still have a hard time finding buyers, because they suck and are only there as a formality. Plain and simple.

Don’t listen to the naysayers. The best case for affiliate marketing being a legitimate business strategy is the fact that it’s legal all ’round the world, and is growing increasingly popular.

It’s very cheap for the marketer and the owner of the product, not to mention very transparent. Unless you’re doing it badly, you don’t just throw links at people. You review or present products and give your opinions.

But pyramids? They’re illegal, bub. Not everywhere, but in the USA, Canada, and most of the West. Throw in China, Japan, and Russia for good measure.

It’s easy to see why pyramids are banned in many places. They’re cesspools of fraud and deception. Still, even in banned countries, some schemes survive as MLMs, or multi-level marketing programs. MLMs are supposed to be legal, but they’re mostly fronts for pyramid scams.

There you have it. Conclusive evidence that affiliate marketing isn’t a pyramid scheme.

All in all, if you’re looking to make money online, avoid pyramids at all costs. Look for high costs and emphasis on recruiting, and don’t fall for the “get rich quick” temptation. When all’s said and done, they fail anyway.

Affiliate marketing, though, is completely legit. You simply recommend products and get paid for every referral. Lots of huge companies, like Apple and Nike, have affiliate programs. Their trustworthiness isn’t a question.

If you’re still unconvinced about affiliate marketing, here are 10 good reasons to start. You’d be surprised at what you’re missing!

Why do so many people believe the pyramid scheme myth? Got any theories? Leave your thoughts below!

Your partner in pyramids,

8 thoughts on “Is Affiliate Marketing a Pyramid Scheme? – Debunking a Stubborn Myth”