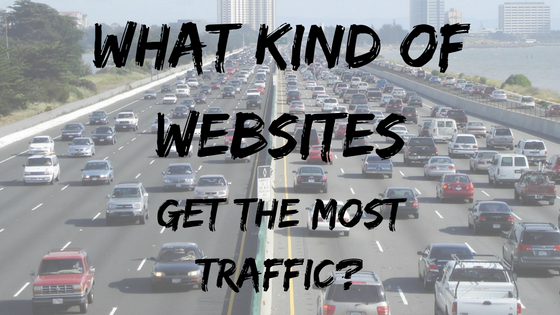 Once you’ve decided to startup a website (good choice!), it can be hard to choose what kind of website to, well, startup.

There are countless niches that you could decide on, and all of ’em have their own advantages and disadvantages.

Lots of people will tell you to just choose a niche you’re passionate about. And that’s pretty much the best decision you can make. After all, a blog can be hard to maintain, especially if you don’t care much about what you’re blogging about.

By that reasoning, any website could be a good one. There’s traffic in every niche. But what kind of websites get the most traffic?

If you’re asking this question, you probably don’t care about passion. You just want success. You just want a piece of a huge pie. That’s totally fine. Nothing wrong with going where the money (or traffic) is.

There’s a ton of so-called ‘evergreen‘ niches out there. These niches are absolutely huge, and will never die out. Even though there’s thousands of sites dedicated to them, they’re still not saturated.

Obviously, they get a lot of traffic, so they’re very profitable. You would do well to consider them.

Hey, what are they, anyway? Let’s check out the trio of evergreens!

This is the king of evergreen niches. I bet there’s a zillion health/fitness niche sites out there. Everyone wants to be healthier, or eat healthier, or lose weight, or work out better. You get the point.

Of course, the narrower niches will perform the best. So “low-carb” cooking would be way better than “cooking,” you see.

That’s just a tiny fraction of what the health and fitness niche is capable of. Some sites focus on even the smallest thing, like fish oil. Maybe that’s a big thing, actually. I wouldn’t know. Hey, that’s a niche right there! Health misconceptions!

Despite its size, health and fitness isn’t saturated at all, so new blogs have a good chance to make their mark. The narrower your niche is the better, though, so don’t go too broad expecting to get more traffic.

This is almost as popular as health, and it’s easy to see why. Pretty much everyone wants more money. You do too, which is why you’re even reading this to begin with! Heck, this site is in the wealth niche. Guilty as charged.

Millions of people search for terms like “make money online” everyday. The traffic is there. Just look at the graph:

The money niche is ginormous. Some of its biggest sub niches are affiliate marketing, which is a big passion of mine, eCommerce, and freelancing. These are all mega-niches in their own right.

You can go further and find more sub niches:

The money niche is a big reason why there are so many get-rich-quick schemes out in the wild. Scammers know how strong the lure of money is. It’s so strong that they get rich by promising others that they’ll get rich. Don’t buy into that trash.

That actually reminds of something. You know the reason people buy into those expensive scams? They see it as an investment, not an expense. People like to buy “make money” products.

As long as there is internet, there’s gonna be mass traffic for wealth sites. If you choose this niche, try not to promote scams or anything like that. It only hurts you in the end.

Did you know that chat rooms for dating first appeared in 1988?

I actually thought this would be first, but third is still reasonable. Romance is just a little behind the other two, but it’s huge nevertheless.

Relationships are a huge part of our lives. Everyone wants to meet someone, or have more success in a marriage. This is a very busy niche.

The romance niche covers everything to do with relationships. Sites like OkCupid, Match.com, all that stuff. But dating is just one part. Think “love” and you’re there.

With romance, you could narrow any niche down even further by making it about a specific gender. You could take the marriage advice site and make it about marriage advice for men. It changes everything!

You could change up more factors than just gender. Some successful websites have done this to great results. Take jdate.com. It’s a dating site for Jewish singles. And then there’s Grindr, an app for homosexual men. I know, it’s an app, but it still counts.

If your site is able to narrow down its niche enough, it could easily generate a lot of traffic.

The Value in Choosing Evergreen Niches

Obviously, this whole post is about traffic, and these niches are the busiest in that regard. So if your only worry is traffic, it’s a good idea to choose one of these.

But if you have more than just traffic to consider… that’s pretty much the same story. If you’re able to own multiple websites, I strongly recommend devoting one of them to an evergreen niche.

The simple reason being, there’s just such a huge market for them, and there are so many sub niches available. By narrowing a niche down, you’re able to capture some traffic easily, while at the same time leaving yourself open to expand once you have some authority.

Remember, these niches are never gonna fade. Health is a permanent issue, especially with lifespans rising ’round the world. That’s without obesity and other diseases.

Wealth is also permanent. For thousands of years, humans have looked for ways to earn more money. It’s not gonna stop anytime soon, especially in this economy.

And romance? Biologically-required. Whether it’s looking for a relationship or trying to fix a current one, people need help, and a website is the perfect place to go for it.

You probably know by now that you shouldn’t be too general. Choose an audience you identify with. I’m a male internet marketer in my 20s, so I’m not gonna offer relationship advice to women aged 34-50.

As long as you go that route, it’ll work out in the end. Keep in mind that these niches don’t guarantee traffic right away; you still have to work very hard and be very patient.

Do work in any of these niches? Are you considering it? Leave your thoughts in the comments below!

Your neighbor in niches,

1 thought on “What Kind of Websites Get the Most Traffic? – A Look at Evergreen Niches”